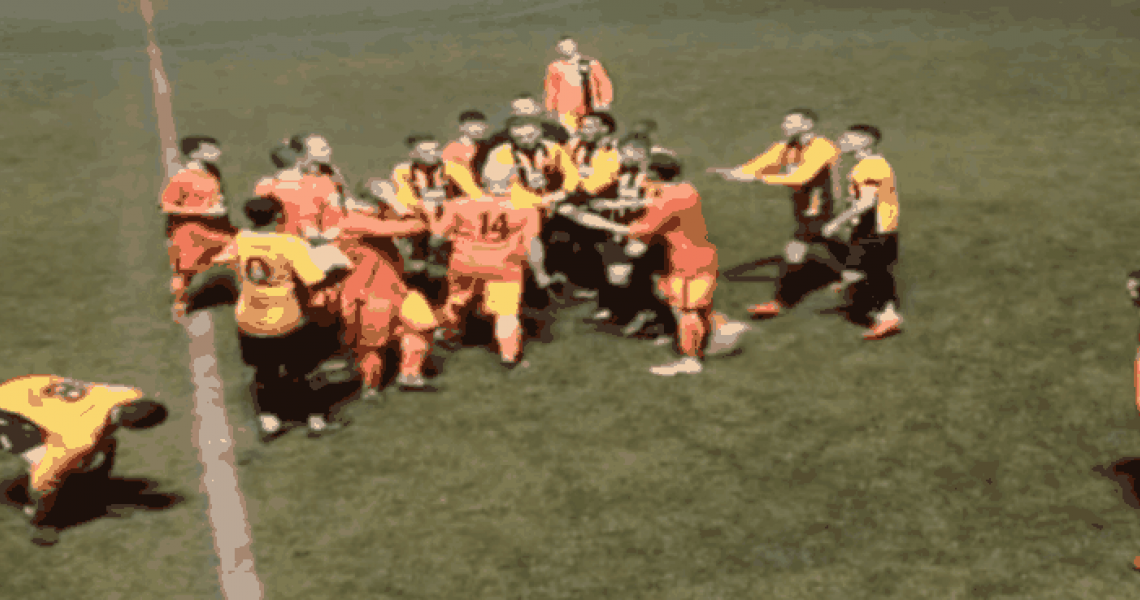 Recall a time when, during a football match, you saw a player (or players) lose their composure and control.  One type of incident that comes to mind is the so-called ‘mass brawl’; a cluster of players, frustrated, angry and primed for physical competition acting in a very aggressive manner towards each other.  It is, of course, the referee’s job (with the help of their assistants) to observe the behaviour of the players and punish those guilty of over-stepping the mark.  The prospect of dealing with this may cause what psychologists label cognitive anxiety: negative stress that manifests itself psychologically.  This is different to somatic anxiety, where negative stress is seen in physical symptoms such as sweating, restlessness and the desire to visit the toilet a bit more frequently than normal!  While these are unpleasant, they are normal sensations that may not adversely affect performance.  Cognitive anxiety, on the other hand, can wreak havoc on an official’s display.

Cognitive anxiety has many unhelpful consequences for referees.  It can create confusion when making decisions, it can slow reaction times and it can cause us to modify our behaviour.  For example, one study found that when individuals are suffering from cognitive anxiety, they tend to ‘play it safe’ and avoid making risky decisions.  This finding is replicated in other studies that relate directly to officials.  For instance, Australian researchers found that referees in Australian Rules Football are more likely to make incorrect decisions when the score-line is close.  This is somewhat surprising to sports fans who feel that, in high-pressure game-winning moments, officials have to get those calls right.

But this is what cognitive anxiety does: it creates ambiguity in our decision-making process and, importantly, we start to doubt ourselves.  This doubt is debilitating.  Those wrong calls in tight games?  They are attributed to referees wanting to avoid criticism.  They want to keep their names out of the papers and out of the post-game analysis, whether that be in the studio or in the pub.

A few weeks ago, we discussed Albert Bandura’s (1977) model of self-efficacy.  If you can’t recall it, it’s below in figure 1.

The aspect of the model that is sometimes neglected is emotional state.  While all antecedents of self-efficacy are of great importance, much research has been done on the impact of an athlete’s emotional readiness for competition.  As ever, investigation into referees and their emotional state prior to taking control of a match is behind the curve, particularly when compared to the research done on players and coaches.  Development of psychological training in officials is not only encouraged but badly lacking.  One level 5 referee told me when interviewed for my book, Blowing the Whistle: The Psychology of Football Refereeing, that he had never been coached or advised on any psychological aspect of the game.  Using Bandura’s framework, we can help to control cognitive anxiety (and thus improve our emotional state by decreasing cognitive anxiety) by utilizing some of the other branches of the model.

For instance, let’s take verbal persuasion.  As mentioned in an earlier article, an official will rarely have a fan base present at matches – in fact, it is more likely to be the opposite!  While players and coaches will hear the crowd encourage them with good will and chants, referees are treated with silence at best and disdain at worst.  It is imperative, therefore, that the referee acts as their own cheerleader.  Players do this all the time, using a commonly used technique called ‘positive self-talk’ and it is time for officials to replicate it for themselves.

Often, when experiencing cognitive anxiety, individuals will catastrophise outcomes.  They use extreme language, create non sequiturs and awfulize the consequences.  This is irrational as not only does it not help a referee achieve their goals of being level-headed, clear-minded and insulated from pressure, it actually reduces the likelihood of good performance.  Let’s look at some examples of statements that referees may say to themselves before or during a match:

It is human nature to have thoughts like this from time to time, however referees must remember that these phrases do not offer encouragement and increase our cognitive anxiety – a double whammy for our self-efficacy!  Referees need to combat this with what psychologists sometimes refer to as thought-stopping.  An effective method for doing this is to practice positive self-talk.  Essentially, the aim of this exercise is two-fold.  Firstly, to prevent the official dwelling on the negative statement.  Secondly, to increase self-efficacy by improving emotional state and to increase verbal persuasion.

So how is it done?

I recommend that, when people experience a negative statement such as those listed above, they write them down on one side of a sheet of paper that has been divided in half.  On the other side is where a referee can write down a positive alternative.  It is important to note that this is not to write down an unrealistic, idealistic and emotional statement.  Rather, it is about control: thoughts happen to you, self-talk is something you do.  Let’s look at some examples:

Hopefully, you can see that stopping the thought and acting upon it is a trusted method to gain back control.  Importantly, this feeling of control can help change our perception of an event (or the prospect of an event) from one of a threat to one of a challenge.  The notion of perception is incredibly important regarding sports performance.  Imagine you are lining up before playing in a World Cup Final.  How would you feel?  Would your heart be racing?  Would you be sweating?  Would you feel hot?  Probably.  You may consider this to be a feeling of anxiety, but isn’t that how you feel when you are excited about something?  When a great opportunity or challenge awaits you?  Taking control of these thoughts and changing your perception of events is an important step in decreasing cognitive anxiety.

Let’s return to the example of the ‘mass brawl’ that we began this article with.  Control is an important sensation to officials and when a referee feels that invaluable sense of control, they perform well.  Consider this testimony given to psychologist Rich Neil and colleagues about a physical confrontation:

“When they all started fighting I started to get anxious, you know, worried… at the end of the day it was 22 fully grown men fighting with little old me going in there, in the middle, to try and stop it. So that kind of scared me, made me feel really uneasy and threatened… from that moment it started going downhill drastically and I was blowing up for everything… the decisions up to half time were shocking, they were just shocking, I just didn’t know what I was doing, where I was.”

The significant point here is that, as a consequence of the anxiety felt by the official, decision-making was affected.  Compare this statement to one from a referee with a different perspective:

“In my last season I refereed a youth game and it was one of those mass mêlées… I thought ‘stand back, they’ll split up eventually, look at it ok, I’ll have that one [player], that one, and that one.’ Nice, clear and concise, and I was in control of the situation, giving cards out to the right people.”